Corynebacteria species are commonly found in nature's soil, water, plants, and food products. With exception to diphtheria, they can even be found in the mucosa and normal skin flora of humans and animals. Some species are known for their pathogenic effects in humans and other animals. Perhaps the most notable one is C. diphtheriae, which produces diphtheria toxin. There are a few other species that can cause disease, but they typically affect only those with immunocompromised systems.

The most notable human infection is diphtheria, caused by Corynebacterium diphtheriae. It is an acute and contagious infection characterized by pseudomembranes of dead epithelial cells, white blood cells, red blood cells, and fibrin that form around the tonsils and back of the throat. It is an uncommon illness that tends to occur in school-aged children, the elderly, immunocompromised people, and those with prosthetic devices such as heart valves, shunts, or catheters. It can occasionally infect wounds, the vulva, the conjunctiva, and the middle ear. It can also be spread within a hospital.

Several species cause disease in animals, most commonlyC. pseudotuberculosis which causes caseous lymphadenitis. Some are also pathogenic in humans. Some attack healthy hosts, while others tend to attack the immunocompromised. The effects of infection include: granulomatous lymphadenopathy, pneumonitis, pharyngitis, skin infections, and endocarditis. Corynebacterial endocarditis is seen most frequently in patients with intravascular devices. C. tenuis is believed to cause trichomycosis palmellina and trichomycosis axillaris. C. striatum may cause axillary odor and C. minutissimum causes erythrasma (brown, scaly skin patches).

Non-pathogenic species of Corynebacterium are used for very important industrial applications. These include: the production of amino acids, nucleotides, and other nutritional factors; bioconversion of steroids; cheese aging; and production of enzymes. Some species produce metabolites similar to antibiotics, anti-tumor agents, etc. One of the most studied species is C. glutamicum, whose name refers to its ability to produce glutamic acid in aerobic conditions. It is used in the food industry as monosodium glutamate (MSG) in the production of soy sauce and yogurt.

Species of Corynebacterium have been used in the mass production of various amino acids including glutamic acid which is a popular food additive made at a rate of 1.5 million tons per year. The metabolic pathways of Corynebacterium have also been altered to produce lysine and threonine. So it is possible that you have one strain or another of this bacterial genus from the foods and supplements you take

This Quantum Formula antidotes the various species in the Corynebacterium genus.

Detoxification of all Corynebacterium toxins and poisons

Detoxification of all Enterococcus toxins and poisons

An abscess is a collection of pus (dead neutrophils) that has accumulated in a cavity formed by the tissue in which the pus resides. They are usually caused by bacteria, parasites or other foreign materials (e.g., splinters, bullet wounds, or injecting needles). An abscess is a defensive reaction of the tissue to prevent the spread of infectious materials to other parts of the body (making it a good thing, but tell that to the pain it causes!) The bacteria/parasites (or foreign materials) kill the local cells, resulting in the release of cytokines. The cytokines trigger an inflammatory response, which draws large numbers of white blood cells to the area and increases the regional blood flow.

The cardinal symptoms and signs of any kind of inflammatory process are redness, heat, swelling, pain and loss of function. Abscesses may occur in any kind of solid tissue but occur most frequently on skin surfaces, where they may be superficial pustules (boils) or deep skin abscesses. But they can also form in the lungs, brain, teeth, kidneys and tonsils.

Left unresolved, major complications can occur, including spreading of the abscess material to adjacent or remote tissues and extensive regional tissue death (gangrene). An abscess will begin to heal once it has drained in most cases. You cannot lance a boil until the head is soft. Pricking (lancing) the white or yellow head (but wait until there is a head) with a sterile needle is recommended. Squeezing is NOT recommended as it can push infected debris through tissue back into the blood and it can also promote scaring. Natural drainage is the best solution, let the body perform the miracle.

If the head of the abscess is hard, like you see in the photo, make a paste of IC-2 and Liquid Detox and wrap it over the area. You can add a dab of Healing Salve if you need to keep it as a paste. The IC-2 and Liquid Detox will draw the toxins to the surface and help the boil soften and come to a head so you can lance it for drainage. Once a boil is lanced and begins to drain, Liquid Detox can be applied to a band aid or bandage and applied over the abscess to initiate healing and keep the site from re-infecting. If the abscess appears as an open wound, pack it with Healing Salve to help it heal quickly and with the least scaring.

If your abscess is in a tooth, take some of the Healing Salve and mix it with equal parts of IC-2 and pack it between the cheek and the tooth with the abscess. This will help draw the infection out of the tooth. If there is pain in the tooth, take a piece of ice and rub it along the web between the thumb and pointer finger.

HOME REMEDY: If you don't have any of the products on hand, and the head of the abscess is hard, like you see in the photo, make a paste of Epsom salt and a little water to keep it moist and wrap it over the area. It will draw the toxins to the surface and help the boil soften and come to a head so you can lance it for drainage. Hunts tomato paste can also be used on a boil to soothe pain.

NOTE: Remember that every tooth is located along a meridian, so infected teeth demonstrate a deeper issue with the correlating organ. If boils keep occurring in the same location, check the meridian charts to see what internal body function that point represents and support it with the appropriate remedy. ADDITIONAL! Dr. DeHaan always recommends a tooth be pulled rather than getting a root canal for long term health benefits. More about teeth

Dengue fever, also known as breakbone fever, is an infectious tropical disease caused by the dengue virus. Dengue is carried and transmitted by the mosquito. Typically, people infected with dengue virus are asymptomatic (80%) or only have mild symptoms such as an uncomplicated fever. Others have more severe illness (5%), and in a small portion it is life-threatening. The incubation period (time between exposure and onset of symptoms) ranges from 3–14 days with the most common being 4–7 days. Travelers returning from endemic areas are unlikely to have dengue if fever or other symptoms begin more than 14 days after arriving home.

The characteristic symptoms of dengue are sudden-onset fever, headache (typically located behind the eyes), muscle and joint pains, and a rash. The alternative name for dengue, "break-bone fever", comes from the associated muscle and joint pains. The course of infection is divided into three phases: febrile, critical, and recovery.

The febrile phase involves high fever, often over 40 °C (104 °F), associated with generalized pain and a headache, usually lasting two to seven days. During this stage, a rash occurs in approximately 50–80% of those with symptoms. If it occurs in the first or second day of symptoms, you will experience flushed skin, later in the course of illness (days 4–7), you develop a measles-like rash. Some petechiae (small red spots that do not disappear when the skin is pressed, which are caused by broken capillaries) can appear at this point, as well as some mild bleeding from the mucous membranes of the mouth and nose. The fever itself is classically biphasic in nature, breaking and then returning for one or two days, although there is wide variation in how often this pattern actually happens.

In some people, the disease proceeds to a critical phase, which follows the resolution of the high fever and typically lasts one to two days. During this phase there may be significant fluid accumulation in the chest and abdominal cavity due to increased capillary permeability and leakage. This leads to depletion of fluid from the circulation and decreased blood supply to vital organs. During this phase, organ dysfunction and severe bleeding, typically from the gastrointestinal tract, may occur. Shock (dengue shock syndrome) and hemorrhage (dengue hemorrhagic fever) occur in less than 5% of all cases of dengue. However, those who have previously been infected with other serotypes of dengue virus ("secondary infection") are at an increased risk.

The recovery phase occurs last, with absorption of the leaked fluid into the bloodstream. This usually lasts two to three days. The improvement is often striking, but there may be severe itching and a slow heart rate. During this stage, fluid overload may occur. If it affects the brain, it can cause a reduced level of consciousness or seizures.

Dengue can occasionally affect several other body systems, causing its own set of symptoms in addition to the classic dengue symptoms. A decreased level of consciousness occurs in 0.5–6% of severe cases, which is attributable either to infection of the brain by the virus or indirectly as a result of impairment of vital organs, for example, the liver. Other neurological disorders have been reported in the context of dengue, such as transverse myelitis and Guillain-Barré syndrome. Infection of the heart and acute liver failure are among the more rare complications.

The incidence of dengue fever has increased dramatically since the 1960s, with around 50–100 million people infected annually. If you are traveling to an area where you may be exposed to this condition, consider the Dengue Remedy along with the Mosquito Detox remedy.

Detoxification of all Dengue and related species

Detoxification of all Hepatitis A-E and related species

Detoxification of all Influenza and related species.

Detoxification of Measles and related species 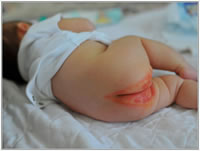 If your baby's diaper area looks irritated and red, chances are he has diaper rash. His skin may also be a little puffy and warm when you touch it. Diaper rash may be very mild - a few prickly red spots in a small area - or quite extensive, with tender red bumps that spread to your baby's tummy and thighs. There's no need to panic, dealing with diaper rash is quite normal and considered part of baby care, especially in the first year or so of your baby's life.

Diaper rash can be caused by anything from a new food to your baby's own urine. Here are the most common culprits: