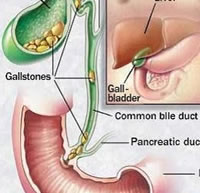 Did you know that 9 out of 10 people have gallstones and don't even know it? Gallstones can be asymptomatic (causing no symptoms), for many years. These gallstones are called "silent stones". The stones are often so small they can't be seen in X-rays or they can be in the liver passages where X-rays won't show them. You may also know you have them, but are experiencing no apparent symptoms.

Gallstones can vary in size and shape from as small as a grain of sand to as large as a golf ball. The gallbladder may contain a single large stone or many smaller ones. Pseudoliths, sometimes referred to as sludge, are thick secretions that may be present within the gallbladder, either alone or in conjunction with fully formed gallstones.

On the basis of their composition, gallstones can be divided into the following types:

Western medicine's belief is that if stones are not causing you pain and if they have not caused a "gallstone attack", then no treatment is necessary. This is not a healthy perspective, but that is modern medicine. The most common medical procedure is to remove gallstones by surgery, called cholecystectomy, and is the removal of the entire gallbladder. Of course gallstones are not created due to a faulty gallbladder, they are formed from one or more of the considerations mentioned below. Their removal is not a solution other than relieving the immediate possible emergency. The body will never function the same without a gallbladder, so I highly discourage its removal. 15% of documented cases suffer terrible gastrointestinal issues, including chronic diarrhea for the REST of their lives if even the slightest complication occurs.

A typical "gallstone attack" is defined when a person may experience intense pain in the upper-right side of the abdomen, often accompanied by nausea and vomiting, that steadily increases for approximately 30 minutes to several hours. A person may also experience referred pain between the shoulder blades or below the right shoulder. Often attacks occur after a particularly fatty meal and almost always happen at night

HOME REMEDY: If you believe you have gallstone pain, drink ¼ cup of apple cider vinegar, followed by 8 ounces of 100% apple juice. Organic options are a much better choice. This will relieve the pain, but you need to pass the stones now. Remember that as many as 90% of people in the modern world are likely to have some gallstones, or at least sludge, so the Gallstone Flush should be done by everyone. The Gallstone Flush is something you can do at home, it is not painful, it is inexpensive and you will pass all kinds of things that are better out than in. Remember, if you have had an X-ray and no gallstones were visible, they will often accumulate in the passages of the liver so an X-ray would not show them. If for some reason a person has extremely large gallstones (they have been found the size of golf balls), consider lithotripsy (a kind of ultrasonic shock wave) to break them into smaller pieces, follow up with the Gallstone Flush before you consider harvesting your gallbladder (removing it). Most gallstones can naturally pass through the common bile duct into the duodenum, and are then passed with the next bowel movement. Jaundice and/or clay-colored stool may raise suspicion. If the above symptoms coincide with fever and chills, consider a trip to the emergency room.

Considerations: The primary cause of gallstones is a diet containing too many animal fats and liver congestion. If the liver is not healthy, you may produce too much cholesterol even without meat consumption. This may be a sign of basic vitamin deficiency, like Vitamin C or Folate. A lack of melatonin could significantly contribute to gallbladder stones. Melatonin inhibits cholesterol secretion from the gallbladder, enhances the conversion of cholesterol to bile, and is an antioxidant, which is able to reduce oxidative stress to the gallbladder. Excess estrogen, such as acquired from the birth control pill, can also contribute to gallstone formation.

You probably do not need remedies in addition to the Home Remedies mentioned if the Flush is used as directed. I listed the cholesterol remedy for the gallstones because if gallstone problems persist, it is a cholesterol/liver issue that needs attention. If you continue to have issues, use the Remedies listed as some toxin is probably contributing to gallstone formation.