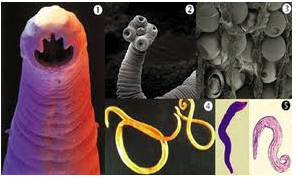 One expert says, "It isn't a matter of IF you have parasites, just a matter of what kinds and how many of them you have". The most common symptoms of a parasite infection include: constipation, diarrhea, gas and bloating, irritable bowel syndrome, joint and muscle aches, anemia, allergies, skin conditions, tumors, nervousness, sleep disorders, teeth grinding, chronic fatigue, and immune dysfunction. These symptoms are listed as the most common, but a wide range of health complaints have been medically linked to parasites, making it difficult to compile a list of the "most common ailments". If a comprehensive list were to be made, it would contain almost every medical condition in the medical library! However, symptoms of parasite infection may not always be obvious. One of the top 10 parasites commonly acquired are tapeworms, yet infestation often causes no symptoms at all! How creepy is that!

There are more than 1000 parasites that infect more than two billion people every year. You might say that parasites are the modern day equivalent of the Black Plague from old. Malaria alone, spread by a mosquito, is found in millions of people. It kills a child every 30 seconds! The tse tse fly spreads parasites that cause Chagas and infect 60 million people. The bite of the sand fly causes Leishmania, infecting over 2 million people annually. As many as one billion people are thought to have round worms! The common belief that visiting a third world country is the primary way to contract parasites is not true at all. International import and export of people and merchandise have brought parasites of every kind to the most civilized nations. It is true that the majority of parasite infestation is found in unindustrialized parts of the world, as well as areas with more poverty and less sanitation. These parasites need other living hosts to survive, and they are equal opportunity critters. They don't care if you are rich, poor, tall, short, black or white.

How Did I Get That Parasite?
We can get parasites from contaminated food or water, but don't assume it only occurs from undercooked pork or low-grade sushi. The very healthy fruits and vegetables you eat may have parasite eggs lurking on them. Did you know certain parasites can lay as many as 200,000 eggs in one day? You can also acquire parasites from sexual contact. Parasites, or their eggs, usually enter the body through the mouth, nose and eyes, but can also enter through abrasions in the skin and will even burrow into your skin! Other risks for parasite infestation include: walking with bare feet, improper disposal of feces, lack of hygiene, physical contact with an infected person, or playing with your favorite pet. We all love furry, little puppies, but approximately 240 diseases can be spread from animals to humans through parasites.

Detoxification of Parasites
It is commonly believed that special herbal detox programs and various natural treatments like the famous zappers will get rid of any acquired parasites. The issue with these types of treatments is that parasites are not a simple object in the intestine that can be flushed out. They are living organisms that will fight to survive extermination. Dr. DeHaan has tried every cleanse, combination and gadget created for parasite detox looking for the single best cure. Over the years he discovered that while these parasite cleansing programs and techniques do help pass worms and parasites, they generally do not RID the body of them. When you see parasites in the toilet or moving down the colonic tube, it means you did eliminate some parasites. However, if it leaves a few eggs behind, your problem will be back. In addition, Dr. DeHaan frequently found parasites in the glands and deep tissues of the body, even the nervous system where they aren't supposed to be, according to the CDC. Thus using a detox like our Quantum Remedies can be much more effective because the vibration reaches all tissues, not just the intestine, and it essentially gives your body a set of instructions as a systemic cleanse rather than a cleanse that acts like a poison in the intestinal tract only.

Detoxification of all Giardia and related toxins

Detoxification of all Malaria and related toxins

Detoxification of all Pinworm and related toxins.

Detoxification of all Trichinella and related toxins